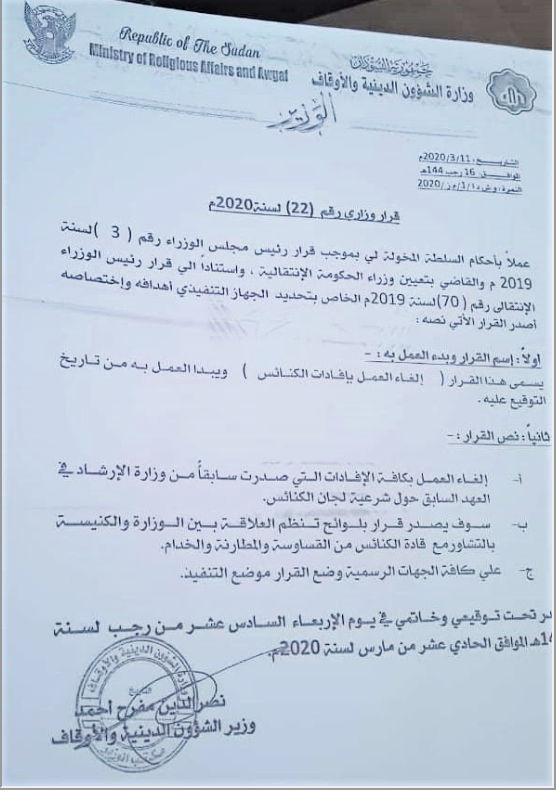 Move lauded as first step to returning churches to their leaders. 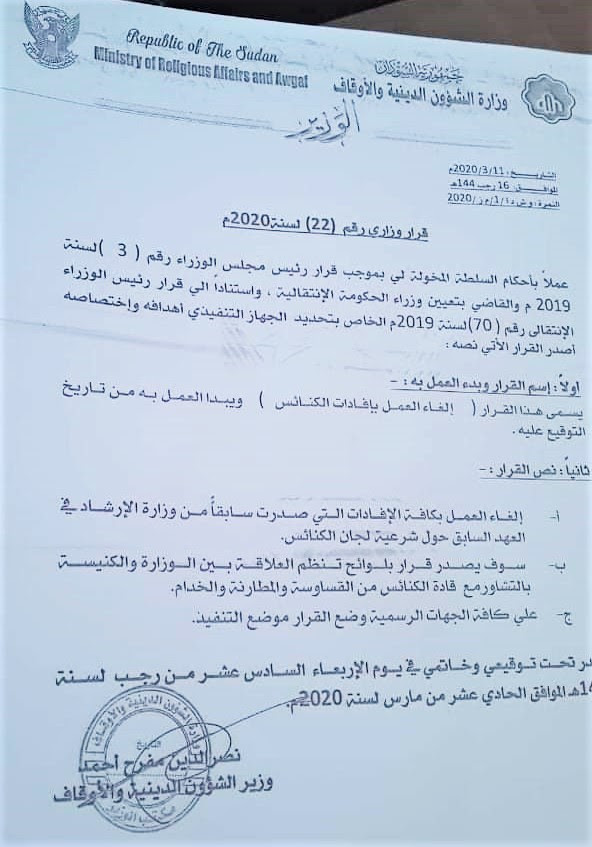 “All government-appointed committees are abolished as of today [Wednesday, March 11, 2020],” the order signed by Minister of Religious Affairs Nasr al-Din Mufreh states.

Further legal action will be needed to regain some church properties lost under committees imposed by the government, sources said. The Bashir regime had taken over properties of the Sudan Presbyterian Evangelical Church (SPEC) by imposing a committee to run its affairs and also imposed a new administration on the Sudanese Church of Christ (SCOC) that resulted in the closing of at least one of its churches.

The ministerial order was lauded as the first move in Christian leaders regaining oversight of their churches and properties. The Rev. Yahia Abdelrahim Nalu, head of SPEC, described it as a good step forward.

“Most of the problems that occurred in churches, i.e. the Sudan Presbyterian Evangelical Church, the Sudanese Church of Christ and the Pentecostal churches, were caused by the committees appointed by the government,” Nalu told Morning Star News.

Churches in Sudan became a target of the previous Islamist government shortly after the secession of South Sudan in 2011.

“Congratulations to the church in Sudan, for this is a right decision that is widely accepted in Sudan and outside,” Moris Rafat, a Sudanese Christian, commented in Arabic on his Facebook page.

The committees imposed by the former Ministry of Guidance and Religious Endowment were illegal, according to church leaders.

The new order directs officials to implement the decision, stating, “All respective authorities should comply with this order.”

Mufreh said he would issue another order to regulate relations between church leaders and the government but did not include a time frame.

In light of advances in religious freedom since Bashir was ousted in April 2019, the U.S. State Department announced on Dec. 20 that Sudan had been removed from the list of Countries of Particular Concern (CPC) that engage in or tolerate “systematic, ongoing and egregious violations of religious freedom” and was upgraded to a watch list.