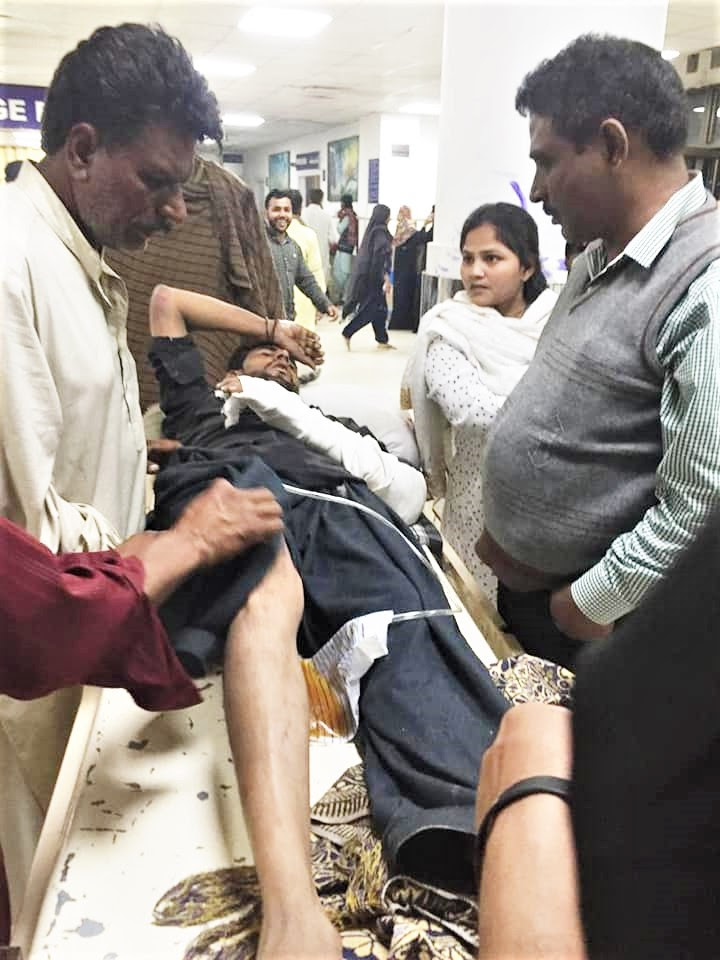 LAHORE, Pakistan, February 28, 2020 (Morning Star News) – A Muslim landowner on Tuesday (Feb. 25) chained and tortured a young Christian man after accusing him of “polluting” his tube-well water by rinsing in it, sources said.

Saleem Masih, 22, had finished unloading chaff in fields in Baguyana village, Karsur District, some 50 kilometers (31 miles) from Lahore, and was rinsing himself off in the tube-well when property owner Sher Dogar and other men rushed over, yanked him out of the water and began beating him, according to the Christian’s father, Ghafoor Masih.

“They cursed and abused Saleem for ‘polluting’ the water, calling him a ‘filthy Christian,’” the elder Masih told Morning Star News. “They then dragged him to their cattle farm, where they chained his hands and feet and continued to torture him with sticks and rods. They also rolled a thick iron rod over his entire body, causing multiple fractures in his left arm and ribs. Saleem couldn’t bear the pain and fell unconscious.”

The father of eight, a member of the Associate Reformed Presbyterian (ARP) Church USA, said police officers informed the family at about 9 a.m., telling them to come to Dogar’s cattle farm.

“When we reached there, we found Saleem lying unconscious on the ground, his face and body bloodied due to the torture,” he said. “Dogar had apparently summoned the cops himself, and it was evident that he had also bribed them, because they tried to coerce us into ‘settling the matter’ amicably.”

Dogar and his colleagues said that Saleem had “committed a crime by dirtying” their well water, and that his punishment was “justified,” the elder Masih said.

The Masih family pleaded with the landowner to free Saleem Masih so they could take him to a hospital to keep him from dying.

“After much pleading, they allowed us to take Saleem while the police acted like spectators,” he said.

They took him to a district hospital where he received initial treatment, and then doctors told them to take him to Lahore’s General Hospital due to the severity of his internal injuries, Masih said.

“After seeing the police’s indifference to our ordeal, I do not have much hope that my son’s attackers will be brought to justice,” he said.

“It’s a pity that an innocent youth is fighting for his life in the hospital, whereas those who had subjected him to inhumane torture were allowed to go scot-free,” Qayyum told Morning Star News.

He said successive governments have failed to reform a deeply corrupt police system that often shows religious prejudice toward minority and marginalized communities.

“The police’s attitude is often biased when they deal with matters relating to blasphemy, forced conversions and marriages of girls belonging to minority faiths, and even in minor disputes,” Qayyum said. “In this instance, for example, the police favored the accused and helped them in getting bail even though a young man’s life is at serious risk.”

“There may be some black sheep in the police department, but that doesn’t mean that the entire force is composed of such people,” Marwat told Morning Star News. “We believe that all Pakistanis are equal in the eyes of the law irrespective of their faith or caste.”

Marwat said he would look into the accusation that police officials acted improperly in the case.

“The police officials concerned will face departmental inquiry and be punished if it is found that they are protecting the accused,” he said.

Kasur is the same district where an illiterate young Christian couple was beaten and burned to death by a frenzied Muslim mob in 2014 over false allegations of blasphemy. Shahzad and Shama Masih, 26 and 24 respectively, had been accused of tossing out pages of the Koran along with other household waste.

The mob beat the two with sticks and stones before burning them in a brick kiln in front of police officials who stood watching. Post-mortem reports revealed that the two were alive when they were thrown into the kiln.

After the attack, it emerged that the couple had been falsely accused. The pages that the family burned were their personal documents.

Pakistan ranked fifth on Christian support organization Open Doors 2020 World Watch list of the 50 countries where it is most difficult to be a Christian, and on Nov. 28, 2018, the United States added Pakistan to its blacklist of countries that violate religious freedom.