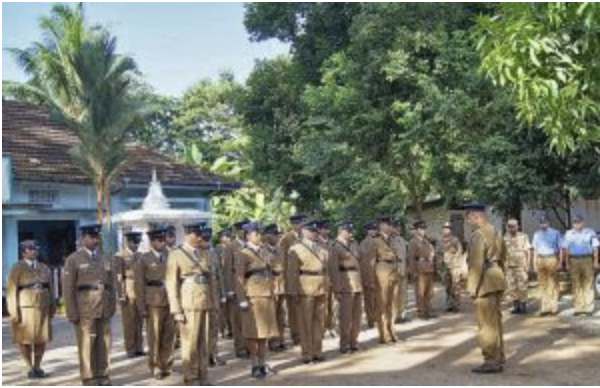 There is no law requiring registration of worship places in Sri Lanka, but in 2017 the country’s Supreme Court upheld a 2008 circular demanding all newly constructed places of worship obtain prior approval. That circular, issued by the Ministry of Buddha Sasana and Religion Affairs, exempts “traditional religions” but does not define them, leaving local authorities to discriminate against non-Buddhist faiths and block their right to worship, U.N. Special Rapporteur on Freedom of Religion or Belief Ahmed Shaheed wrote in a Feb. 28 report.

“Evangelical Christian churches in particular continue to report pressure and harassment by local authorities to close down places of worship because they were not registered,” Shaheed reported. “Their prayer meetings and worship activities are also routinely denied permission to take place. Moreover, intimidation and attacks against clergy and church members, desecration of evangelical churches and interference with religious activities are also perpetrated by local villagers and Buddhist monks.”

Sri Lanka’s religion ministry subsequently ruled that the circular on registration and construction of religious sites applied only to Buddhist facilities, according to the U.S. State Department’s latest International Religious Freedom Report.

“According to some legal experts, however, there is no explicit basis in national law for compulsory registration of places of worship with the state,” the report states.

At least 57 Protestant churches have been ordered without basis to obtain registration in order to continue worshipping, according to Shaheed, basing figures on his visit Sri Lanka in August 2019.

Confusion over the issue gives rise to Buddhist extremists frequently accusing Christians of illegal worship. After a Buddhist mob disrupted worship at a house church in Ihala Yakkura village, North Central Province on Feb. 2, police told a Polonnaruwa District pastor that the church could not worship, according to the National Christian Evangelical Alliance of Sri Lanka (NCEASL).

The pastor had been invited to speak at the house church. When he returned that evening to visit the Christian family living there, about 50 people led by three Buddhist monks assaulted him and his family as they were leaving, according to the NCEASL report.

The pastor was accompanied by his wife, son and eight other Christians, the alliance reported.

“As they were leaving in their vehicles at around 7 p.m., they found that the road had been blocked with logs and felled trees,” the report states. “They were accosted by a mob of around 50 individuals including three Buddhist monks who physically assaulted the pastor’s son and the other Christians, including women, and severely damaged their vehicles.”

The pastor fled with his family to the Siripura police station to file a complaint, and three Christians were admitted to Polonnaruwa General Hospital for treatment, according to the NCEASL. The next day police placed five alleged assailants in custody, though the monks were not among them.

Earlier that day, a mob of about 150 people led by four Buddhist monks had intruded into the village house-church service at about 10:30 a.m., according to the NCEASL.

Christian leaders tried to talk peacefully with the Buddhist mob, but the extremists questioned them about holding worship services in the area, and the pastor called the Aralanganwila Police Station, the report states.

Eight police officers, including the Officer-In-Charge (OIC) of the Siripura police station, arrived, according to the NCEASL.

“The mob demanded an end to the worship service and threatened violence if the Christians were allowed to continue,” the alliance reported. “The OIC, however, allowed the pastor to conclude the service. The police and the mob remained at the premises.”

When the pastor went to speak to the OIC and mob leaders, the monks attempted to assault him; police restrained them, according to the report. Claiming that Ihala Yakkura was a Buddhist village and that Christian worship would never be tolerated, the monks then demanded that the pastor leave and never return.

“The OIC then reprimanded the pastor, stating that the pastor needed to register his place of worship and receive approval from the relevant state authorities and the local temple before conducting Christian worship activities in the village,” NCEASL reported. “He falsely claimed that the activities were illegal.”

The Ihala Yakkure village officer appointed by the central government, or Grama Niladhari, was part of the mob, and she questioned the pastor about his activities and reprimanded him for failing to obtain her permission to conduct worship in the village, according to the report.

“She claimed that the pastor’s activities were illegal and demanded that he refrain from entering the village again,” the alliance reported.

The pastor made a statement at the Siripura police station at around 12:30 p.m.

“The OIC reiterated his demand that the pastor cease his religious worship activities and warned him against breaching the peace,” NCEASL’s report states. “The OIC also advised the pastor against entering the village again, considering the threat to his life.”

Buddhism Supreme
Sri Lanka’s constitution grants the right to manifest one’s religion or belief “in worship, observance, practice, or teaching, both in public and private,” but there are instances where local officials appear to act in concert with nationalist Buddhist organizations, according to the U.S. State Department’s international religious freedom report.

At the same time, Buddhism is granted the “foremost place,” in Sri Lanka’s constitution, which along with some laws commits the government to protect it, according to the report.

The constitution’s Article 9 grants Buddhism the foremost place above all religions and declares that it shall be the duty of the state to protect and foster the Buddhist Sasana (Buddhist Doctrine), she said.

“Although the main intention behind the customary law was to levy the responsibility on the state to give foremost priority to protect the Buddhist shrines, temples, structures and practices, the Buddhist extremists have in the past and even now been using it to cause communal disharmony,” Sumathipalan said.

The right to manifest one’s belief in worship, observance, practice and teaching of any religion is found in Article 14 (1) (e), she said. The constitution does not imply or mention any religion as superior or inferior, and co-existence is the actual spirit of the constitution, she said.

“But unfortunately the Buddhist leaders have been endorsing Buddhist supremacy, which has led to fear and insecurity among minorities,” Sumathipalan told Morning Star News. “In the past nine years of practice at the Constitutional Courts, I have represented Christians in cases where Buddhist monks had subjected them to oppression. It is the nationalistic, racist view adopted by some in the political front to gain the majority Buddhist vote bank.”

In his report, U.N. Special Rapporteur Shaheed states that freedom of religion is not about tolerance alone but the right of each adherent to be treated equally and to manifest religious belief in private or in public.

“Failure by the state to take action to address incitement to hatred and violence will allow extremism to escalate and pose serious challenges to peace-building,” he said.

According to the 2012 census, Buddhists make up 70.1 percent of the population of 22 million, and Christians 8 percent.

Sri Lanka ranks 30th on Christian support organization Open Doors’ 2020 World Watch List of the 50 countries where it is most difficult to be a Christian.