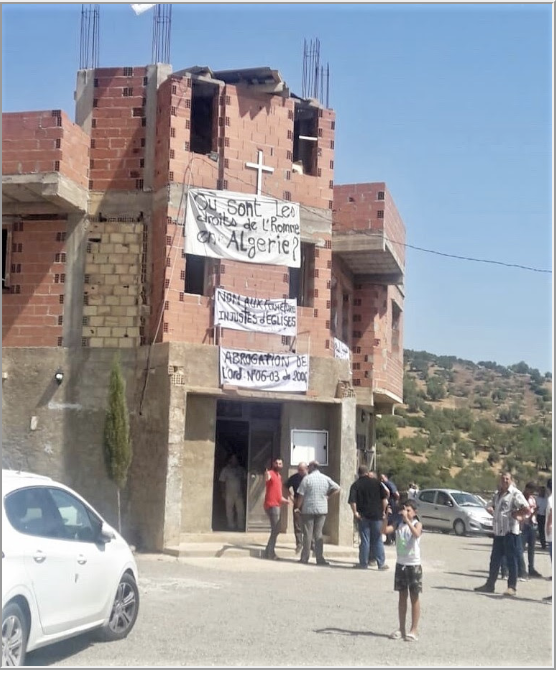 Gendarmerie show up at worship site; Christians refuse to leave.

By Our Algeria Correspondent 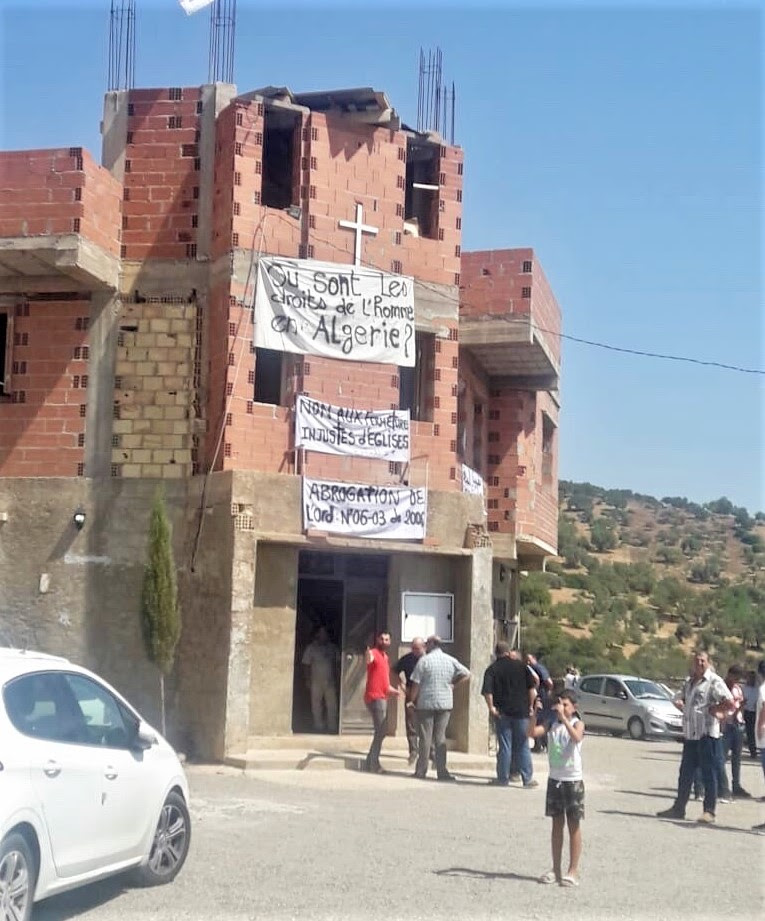 TIZI-OUZOU, Algeria, August 27, 2019 (Morning Star News) – A brigade of gendarmerie showed up at an evangelical worship site in Algeria on Monday (Aug. 26) to execute the latest of several church closure orders from provincial authorities, but Christian leaders thwarted the attempt.

When Akbou gendarmerie parked their vehicles at 9:30 a.m. at the church courtyard in Ighzer Amokrane, 192 kilometers (119 miles) east of Algiers, the building was filled with about 200 Christians from different churches united in prayer and worship, and protest banners hung from the walls: “NO to the unjust closing of the churches,” and, “Abrogation of Law 03/06.”

Authorities had issued a warning earlier this month that the 300-member Ighzer Amokrane church would be closed.

The officers, armed with police weaponry, cautiously got out of their vehicles.

A church elder, a council member of the legally recognized umbrella group of Protestant churches in Algeria, the Protestant Church of Algeria (l’Église Protestante d’Algérie, or EPA) and their attorney greeted them, backed by Christians from 33 churches, sources said.

The attorney, Wahab Chiter, asked to see the closure order. After reading it, he told the brigade chief that it was invalid because the provincial chief was not empowered to sign such an order, sources said. A closure order for a place of worship, he explained, can come only from the commission governing places of worship – a commission that has yet to meet.

Pastor Salah Chalah, president of the EPA, told them he would not comply with the closure order nor the order for all present to disperse.

“What you are doing is unfair,” Pastor Chalah told the officer. “You either close all the churches, or you open them all.”

The gendarmes argued with them that they must execute their orders, but the Christian leaders refused to yield.

The brigade chief telephoned a superior, and he returned 10 minutes later saying they were not going to close the church. They arranged for the EPA president and his team to meet with the head of Bejaia Province on Wednesday (Aug. 28) to try to resolve the matter. After much further discussion, the officers left.

“What has just happened is a feat for the Algerian church,” said one of the Ighzer Amokrane church leaders, Idjouadiene Madjid. “We remain confident in the Lord. The hand that has signed the closing order will end by signing the decree of its cancellation. I have a firm assurance of this.”

Pastor Chalah of the EPA told Morning Star News by phone that the fight is not over.

“This is a victory for us, but the fight is still not won,” he said. “We hope that the chief of Bejaia will agree to receive us on Wednesday.”

Closure of the church requires a court order, according to advocacy group Middle East Concern (MEC). An Akbou church also slated for closure was also spared for now, sources said.

Algerian authorities have engaged in a systematic campaign to close Christian places of worship and other Christian institutions since November 2017, according to MEC. Since then, nine EPA churches and one non-EPA church have received closure orders, with six of them being sealed, MEC reported.

“Most of the EPA churches have been challenged to prove that they are licensed according to a 2006 ordinance [Law 03/06] which stipulates that all non-Muslim worship must be carried out in buildings specially designated for this purpose,” a MEC press statement read. “The government has yet to issue a single license.”

Algerian Christians urge prayer that the meeting with authorities on Wednesday (Aug. 28) will contribute to ending the campaign to close churches, according to MEC.

Earlier this month, police interrupted a worship service to seal a church building in north-central Algeria, less than three months after locking shut another site in the same area.

The EPA has 45 affiliated churches throughout the country. In November 2017, “building-safety committees” began visiting most EPA-affiliated churches and inquired about licenses required by the 2006 law regulating non-Muslim worship, according MEC. Several churches have since received written orders to cease all activities, and authorities have closed a number of them for operating without a license.