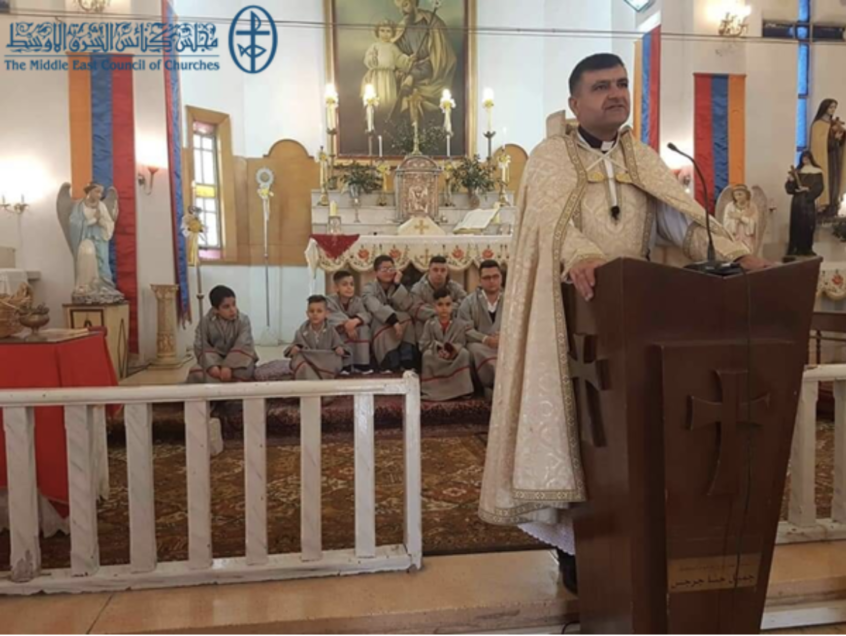 The Middle East Council of Churches is leading calls for renewed prayer for Syria, following the murder of a church leader and his father in a spate of violence in the northeast of the country on 11 November.

Father Hovsep Bedoyan, priest of the Mar Yousef Armenian Catholic church in Qamishli, together with his father, Abraham Bedoyan, was murdered by gunmen in Deir ez-Zour. They were in a car with two others, including deacon Fadi Sano who was injured in the assault. Their vehicle was attacked shortly before their arrival at the Armenian Catholic church in Deir ez-Zour where Father Hovsep made regular pastoral visits and was overseeing church reconstruction work. Daesh later claimed responsibility for the attack, as well as for bombings in Qamishli the same day, some near the Chaldean church, that left at least six more civilians dead.

In joining the widespread condemnation of these atrocities, the Middle East Council of Churches has urged the worldwide church to pray for those directly affected, to invest in peace and reconciliation initiatives, and “to draw inspiration from Father Bedoyan’s testimony in order to strengthen the Christian presence as a sign of hope and love in the wounded Middle East.”

Northeast Syria is home to a range of ethnic and religious communities. The principal Kurdish region of Syria, it also hosts sizeable Syriac, Assyrian and Armenian Christian communities. Turkey initiated a military campaign in October to create a ‘safe-zone’ along the border, in order to combat Kurdish-led forces and to facilitate repatriation of refugees from Turkey. Although this is not specifically a campaign against Christians, Christian communities are deeply affected. The murders in Deir ez-Zour demonstrate the vulnerability of Christians to extremist groups, whether affiliated with the Turkish-led forces or otherwise, operating with increased confidence and impunity. There are also fears that Turkey’s refugee repatriation plans constitute an intentional programme of ‘demographic engineering’ in the region, intended to boost the Arab Sunni presence to the detriment of Kurds and other communities such as Christians.

Following the call of the Middle East Council of Churches, please pray that:

a. those injured and bereaved in these atrocities would know the Lord’s healing, comfort, provision and close presence
b. Christians in Syria would not be intimidated but would find opportunity to be agents of reconciliation, healing, peace and hope – with effective support from the worldwide church
c. political and military leaders of parties involved and in the wider international community, will act with restraint, wisdom and compassion
d. peace will be restored, human dignity respected, and pluralism preserved and strengthened, in northeast Syria and the rest of the country, for the benefit of all ethnic and religious communities
e. all who are intent on violence will know the Spirit’s conviction of sin and respond to the Father’s offer of new life through the Son.