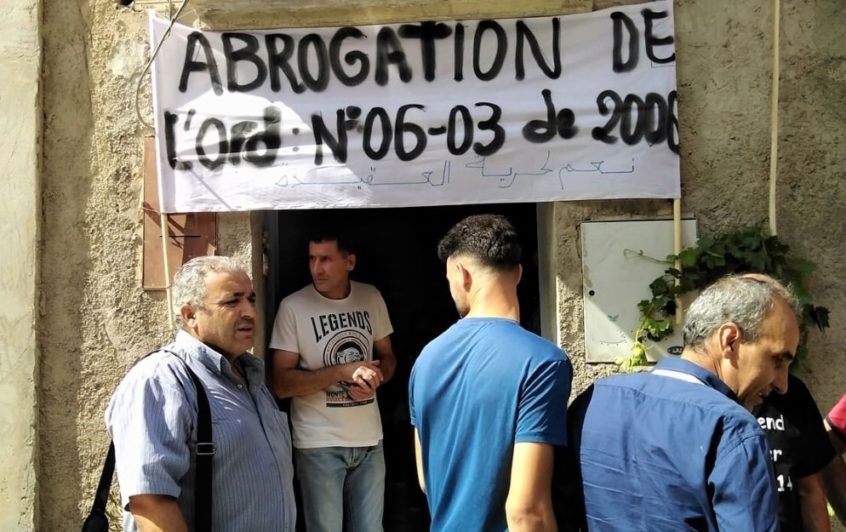 Church leaders and their attorney had asserted that the order from the head of Bejaia Province to close the church in Ighzer Amokrane was illegal because it was not ordered by the proper governing body or a court, sources said.

“No more was heard until the church was sealed on Sept. 2,” according to a MEC press statement.

Akbou gendarmerie forced the owner of the property to accompany them to the Prince of Peace church site in Ighzer Amokrane, 192 kilometers (119 miles) east of Algiers, at 6:45 a.m. in order to seal the building, church leader Idjouadiene Madjid told Morning Star News.

The gendarmerie chose that hour knowing that no one would prevent them from closing the building, Madjid said, adding that only afterward did church leaders and others discover the church door was sealed.

Both the Ighzer Amokrane church and another in Akbou on Aug. 10 had received word of the order by the Bejaia head to close their sites, but gendarmerie acted slowly in order to give church leaders time to work out a solution with provincial authorities and the Directorate of Regulation and General Affairs (DRAG), sources said.

On Aug. 25, church leaders in Ighzer Amokrane received a phone call from gendarmerie informing them that they would execute the closure order the next day. On Aug. 26, representatives of 33 churches filled the church premises in protest. As they united in prayer and worship throughout the day, church and EPA leaders with their attorney told the gendarmes that the order was not valid.

Unable to close the occupied building, the gendarmes advised local officials and EPA representatives to see the provincial head, the only one able to cancel the order, as soon as possible, sources said.

The next day (Aug. 27), Akbou security authorities summoned the owner of the church property in Akbou, where they made him sign documents without him knowing thier content, church pastor Brahim Bourouba told Morning Star News. The owner later learned that they were closure orders, the pastor said.

The brigade chief informed the owner that officers would close the church building later that day, but Akbou church leaders persuaded authorities to wait an extra day to give them an opportunity to make their case with provincial officials.

When the provincial head declined to meet with them and DRAG officials were noncommital, EPA leaders launched a call for support. Christians from different churches arrived to flood the premises, and no officers appeared to try to close the building, Pastor Bourouba said.

Security agents continued to send intimidating messages to the owner of the premises, and on Monday (Sept. 2) at about 6:30 a.m. police arrived at his home so that he could enable them to seal the Akbou church building, the pastor said. The owner was not at home, and they relented, Pastor Bourouba said.

The threat of closure remains, however, and gendarmes have threatened the owners of the properties of both churches with imprisonment, church leaders said.

Another church is under threat of closure, with officers recently summoning a leader of an EPA-affiliated congregation in Maatkas, 20 kilometers (12 miles) south of Tizi-Ouzou. A church elder told officials that officials questioned one of three church leaders at length about its operations, including number of members and names of leaders.

At one point, the elder told Morning Star News, the leader was asked, “Do you receive strangers?”

He was released after two hours, the elder said.

A church unaffiliated with the EPA in the area was closed in 2017.

Algerian authorities have engaged in a systematic campaign to close Christian places of worship and other Christian institutions since November 2017, according to MEC. Since then, nine EPA churches and one non-EPA church have received closure orders, with seven of them being sealed.

“Most of the EPA churches have been challenged to prove that they are licensed according to a 2006 ordinance [Law 06/03] which stipulates that all non-Muslim worship must be carried out in buildings specially designated for this purpose,” a MEC press statement read. “The government has yet to issue a single license.”

Also in August, police interrupted a worship service to seal a church building in north-central Algeria, less than three months after locking shut another site in the same area.

The EPA has 45 affiliated churches throughout the country. In November 2017, “building-safety committees” began visiting most EPA-affiliated churches and inquired about licenses required by the 2006 law regulating non-Muslim worship, according MEC. Several churches have since received written orders to cease all activities, and authorities have closed a number of them for operating without a license.