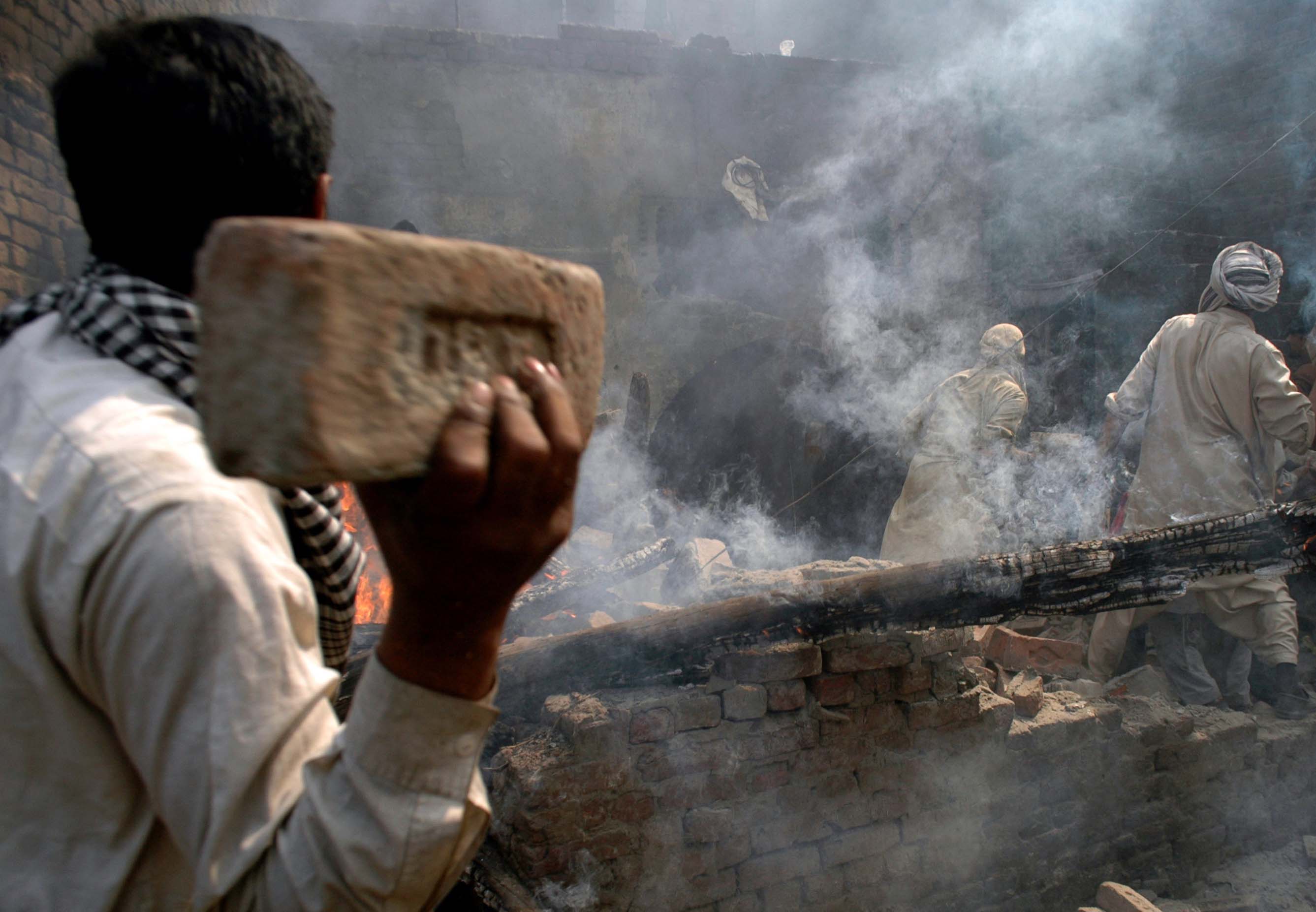 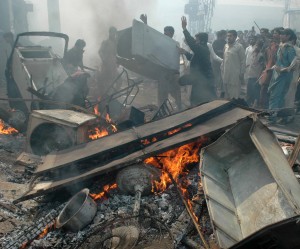 LAHORE, Pakistan, March 11, 2013 (Morning Star News) – Muslim mobs upset over an alleged derogatory comment about the prophet of Islam burned down more than 180 Christian-owned houses and shops and at least two church buildings here on Saturday (March 9) after authorities told police to “let them vent their grief and anger,” officials said.

Lahore’s impoverished Joseph Colony looked like a war-ravaged town by Saturday night. There were no reports of casualties, but the site was reminiscent of the destruction in Gojra in 2009, when eight Christians were burned alive, 100 houses looted and 50 homes set ablaze after a blasphemy accusation.

“The police let our homes burn and be vandalized … a heavy price to pay when you are a Christian in Pakistan,” an area resident identified only as Shaukat told Morning Star News Saturday night as he walked dingy streets littered with burnt furniture and appliances, smoke billowing from small houses while firemen continued to put out blazes. “The entire locality was left to the mobs just because a Christian happened to get involved in a dispute with a Muslim.”

Shahid Imran, a Muslim barber in Joseph Colony in the Badami Bagh area, on Friday (March 8) accused his Christian neighbor, 26-year-old Sawan Masih, of blaspheming Muhammad. Imran alleged that Masih, who runs a small billiards business, had “ridiculed” Islam’s prophet by saying that Jesus was the greatest prophet ever. 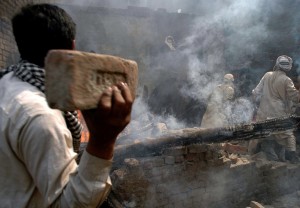 Soon after, crowds of armed Muslims began gathering in the area of about 200 Christian families, mostly sanitation workers, demanding that Masih be handed over to them. They besieged his house and started pelting it with stones, damaging the windows and door. Masih had fled the area as soon as news reached him about Imran’s accusation.

A senior police officer told Morning Star News that they tried to calm the mob, telling them that the matter would be thoroughly investigated. A local trade union leader, Muhammad Amir, seconded the police appeal. The situation worsened, however, when a rival group of Amir arrived and began accusing him and police of supporting a “blasphemer.”

The senior police official said that in order to calm tensions they took Masih’s father, Chaman Masih, into custody.

“At the police station, Chaman Masih denied that his son had committed any blasphemy,” the official said. “He even challenged Imran to take an oath on the Koran to prove his allegation.”

Back at Joseph Colony, mobs ransacked Masih’s house and demanded registration of a case against him. At the local police station, meantime, members of the Sunni Tehreek, a religio-political Sunni Muslim group, also arrived and presented two witnesses, identified as Shafiq and Iftikhar.

“They claimed that Masih had blasphemed in their presence,” the official said. “By then we had begun to doubt the veracity of the charge as the witnesses were revealed after several hours of the alleged incident, but the situation was such that we had to register a case against Masih [FIR No. 112/13] under Section 295-C to prevent further violence and religious strife,” he said.

Section 295-C of the Pakistan Penal Code calls for death or life imprisonment for those accused of blaspheming Muhammad.

On Friday (March 8), the police officer had indicated to Morning Star News that there were reports suggesting religiously motivated violence, and he vowed to protect the Christians, though most of them had already left their homes anticipating mayhem.

Around 10 a.m. on Saturday (March 9), Muslim mobs began gathering in Joseph Colony in spite of heavy police deployment. But the provincial government led by the Pakistan Muslim League-Nawaz (PML-N) had ordered police not to hinder the protestors and “let them vent their grief and anger,” another senior police officer told Morning Star News on condition of anonymity.

Taking their cue from the police’s indifference, the mobs set fire to almost 170 houses and 18 shops, as well as Assemblies of God and Catholic church buildings. A large number of motorcycles and rickshaws were also burned amid the looting mobs. Two police officials who tried to negotiate with the assailants were beaten black and blue.

“Imran [the accuser] and Masih were drinking partners,” he said. “According to our information, the two had a verbal argument at a drinking session on Wednesday. On Friday afternoon, Imran alleged that Masih had blasphemed. Let’s suppose that Masih did say something offensive to him – why were we made to suffer the consequences?”

Area resident Haroon Masih wept as he described how the raiders broke the locks of his door and stole the dowries of his four daughters that he had been gathering for several years.

“They made off with everything valuable I had and then simply set the house on fire,” he said. “My new rickshaw was also burnt to ashes.”

Residents also showed Morning Star News gas pipelines that had been sawed off to ensure maximum spread of fires.

Muhammad Mustafa, a Muslim who owns a tea stall, said he and others tried to stop the mobs from burning the houses of innocent people.

“We tried to stop them, but they wouldn’t listen,” he said. “We have been living with these Christians for the last several years, and there has been no religious animosity between us.”

He added that he regretted that the government’s callousness had resulted in huge losses for poor Christians. Most of the Christian residents had left the area on Friday night (March 8), and those who remained barely managed to save their lives as the passion-driven mobs went on a rampage.

The mobs dispersed with the intervention of Badshahi Mosque prayer leader Abdul Khabeer Azad, too late for area residents.

Chief Justice Iftikhar Muhammad Chaudhry today held the Punjab Province inspector general of police, the Lahore police chief and the civil administration responsible for the Joseph Colony violence. He also rebuked the Punjab government for its inaction on the Gojra attack, saying such indifference encouraged violence against minorities. 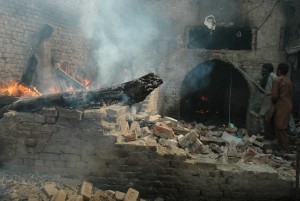 As the area simmered in smoke, Punjab Chief Minister Shahbaz Sharif held a press conference on Saturday night (March 9), announcing that each Christian family affected would receive 200,000 rupees (US$2,045) in compensation.

He also said that displaced Christians would be restored to their homes in four days and that the government would a judicial enquiry by the Lahore High Court.

The chief minister avoided commenting on why police did not take action when the mobs were tearing apart Joseph Colony. He announced the suspension of four senior police officers for inaction, though they had only followed orders to stand down before the assailants.

“The police acted wisely,” he said on a TV talk show. “The mobs were emotionally charged and needed to vent their grief at the alleged sacrilege. We couldn’t just open fire on them or unleash riot policemen, as it would have caused much more damage.”

Police sent Masih to prison on judicial remand on Saturday night (March 9) as large groups of Christians held protests in Karachi and Lahore. Both provincial governments declined to allow the Christians to register their “grief and anger,” however, with police ordered to use tear gas and batons on the unarmed protesters.

By day’s end, Lahore police had taken 150 Christians into custody. They were being held without charge at press time.

Many residents of Joseph Colony, meantime, refused to accept the 200,000-rupee compensation and food offered by the government.

“It is like poison to us,” they screamed as Christian Senator Kamran Michael and Punjab Law Minister Rana Sanaullah visited the area late Saturday night amid heavy security.

The crowd shouted slogans against Michael and the Punjab government, believing Islamic leaders would have heeded them and holding them responsible for doing nothing to stop the violence. The two officials were forced to leave the area after just a few minutes.

The Punjab government later raised the compensation amount to 500,000 rupees, and the checks were handed out to victims.

Asif, the Christian sanitation worker, was also critical of Centre for Legal Aid Assistance and Settlement (CLAAS) head Joseph Francis for not helping to appease the rampaging mobs by announcing that he had turned Masih over to police. Francis had taken Masih into his quarters on Friday night and agreed to represent him.

“After keeping Masih with him for some hours, Francis handed him over to the police around 2 a.m. on Saturday,” Asif said. “We requested him to convey to the Muslims that Masih was in police custody now and they should call off their strike call for Saturday morning, as it was evident that the Muslims would resort to violence. He chose to keep mum for reasons best known to him.”

Francis told Morning Star News that he had informed area Muslims about the arrest of Masih after he turned him over to police.

“The locals wanted to hand Sawan over to the police themselves, but that would have surely led to his instant killing,” Francis said.

Another resident, Yousaf Inayat, held the Punjab government and some Christian aid groups responsible for the destruction.

“While Joseph Francis remained oblivious to the danger we were faced with, other NGO [Non-Governmental Organization] workers were trying to incite us with burnt Bibles they had retrieved from the debris of our houses,” he said. “We lost our homes and belongings in the arson, yet these so-called relief workers were busy seeking air time on TV channels.”

Akram Masih Gill, a Christian and Minister for National Harmony, said he had warned Francis on Saturday evening not to do anything that might trigger violence.

“These NGOs have always played a role in worsening the situation,” he told Morning Star News. “Rather than being concerned for the community, they are all involved in a rat race to seize the victim first.”

At the same time, the minister could not explain his lack of effort to protect Joseph Colony Christians.

“Who would have listened to me?” he said. “The best I could do was keep in contact with the provincial government and police on the telephone.”